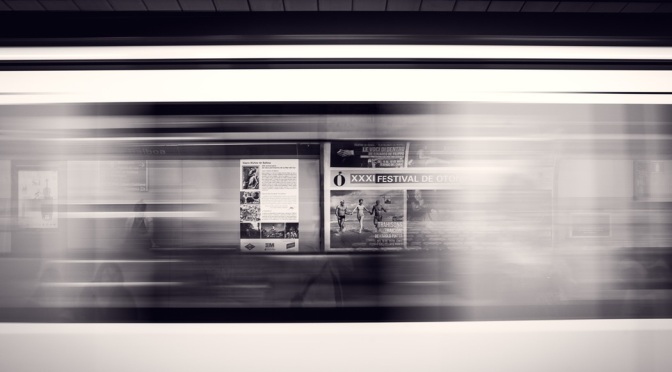 I grew angry, genuinely, with a sneeze today on the train. It was my own, and it rattled me wholly. It was as if I was smacked hard across the face. As if insulted, personally, and while ill-prepared with a clever retort. I muttered to myself fuuuck subsequently, and even spent some time dwelling upon its occurrence. But why, I wondered. What was I so mad at? Who?

Staring at the electronic “This Is:” banner which lists the upcoming stops in sequence upon the train’s underbelly is my go-to time killer/expander while riding. I indulge it actively, as if energy sent its way from my being, from the most anxious parts of my soul, will affect the train’s velocity. But it’s more than that, really. I’m always convinced I’m going to miss my stop. Books are sentences, paragraphs maybe, never chapters. I can never fully commit. I’m never truly at ease on the train.

I’ve transitioned from books to podcasts and music while on the train. Earbuds in, hands folded and my eyes available to fixate on the banner, and to double check its assertions on signage posted in the stations negotiated on route. Closing the door upon one problem, opens it promptly on another: a burgeoning guilt over squandering ideal opportunity to read, an endangered commodity these days. Fuck if I can ever win.

A stop at York Street amassed a chromatic yield of passengers. A rotund prepster adorned with pastels head to toe lugging with him a bulky bag of golf clubs. A teenage girl with the curliest hair I have ever seen draped in neon. A debonair, young businessman in a brown suit with red New Balance sneakers and his glossy, brown hair vehemently slicked back. Two more stops, I firmly reminded myself, as the train’s doors leisurely came to a close.

“I’m not so sure I’m comfortable telling stories like I used to,” my friend told me once as I sat adjacent to him at the bar.

“To focus on other people’s stories,” he continued. He had been building up to this, I insinuated. “Be the megaphone that they shout out of. Help shape stories. I think editing is my true calling.”

“It’s more difficult than most think as well,” I sympathized.

“Yeah, well it’s exhausting. But it’s more than that I guess. I just want to create something bigger, something that lasts. Or lasts for a little while at least. I know all things are perishable.”

“Just because something is short-lived, shouldn’t diminish its value. I’d go the other way on that actually. Because something is temporary it’s value is increased. Think of life for example, this conversation even. But, let me me ask you something. What does it feel like when you write?”

“Feel like? Freeing, I guess. Reckless too. But there’s a grind there. Reading, in comparison has always been that release from life, but writing, it’s like life kind of, hard but rewarding at times. Usually worth it.”

“Think about that some.”

“Yeah. No doubt. I will. But I’m trying not overthink things so much,” he admits, unconvincingly, as if he were trying out new material. “I prefer these days to clean the bathroom in the dark.”

“What the fuck does that mean?”

“It’s not only an expression, implying that sometimes it’s just better not to know, but also one of the stranger things I do?”

“Wait, you clean the bathroom in the dark? And doesn’t the expression ‘ignorance is bliss’ suffice for that notion?”

“Yeah, I don’t shine a light on all the dank and moldy crevices when I go in on the bathroom. Just scrub hard, and hope I’m getting it done. And no, I don’t think it suffices. We need new terms, new words.”

“Well, it sounds like you’re on the job, so the literary world can rest at ease,” I scoffed. “And anyways, you are a great writer so you should stay on the grind.”

“Fuck! What’s wrong with us. Damn delicate, insecure writers. Always looking for reassurance, and fuel to keep going. I’m sorry man. Didn’t mean to fish for that. But, thanks.”

“You got it. And don’t beat yourself up, I do it myself, In one way or another.”

The shrill of the train’s brakes fractured my remembrance, and just in time. Almost fucking blew it. Delancey Street. The escalator that hoisted me to the streets above creaked with strain. The teen ascending before me spat a massive sphere of phlegm upon it’s metallic steps, more proof that no good deed goes unpunished.

Her hair. It’s as as if there were nothing else. Sopping and glistening in the morning sun, I couldn’t look away for some reason. For a full block I was adrift in the movements of her slick, charcoal hair. The city’s tall towers swelled around her lubricious locks, and I wafted over the sidewalk hypnotized, until a car horn reminded me I was encroaching where I didn’t belong. The heart of the city beating beneath my feet.

I feel swathed in a blanket of discontent these days. So many of those I keep near to me are assiduously wondering what’s next and where to. I don’t suffer from this brand of incertitude. Whether it’s a physical defect in my wiring, or a serendipitous convenience, I yearn for no foreign lands or chests overflowing with treasures. I have already come upon the streets I hope to wander until the end of days, and the haunts I wish to waste the days away in. I am pretty at ease in the world. Except on the train that is… 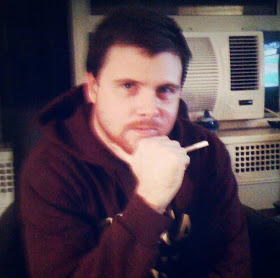 Michael Shields is a writer who resides in Brooklyn, New York. He is the Founder and Chief Editor of Across the Margin, a home for writers and wordsmiths who revere honesty and idolize wordplay.

Visit Michael at his magazine, http://acrossthemargin.com.