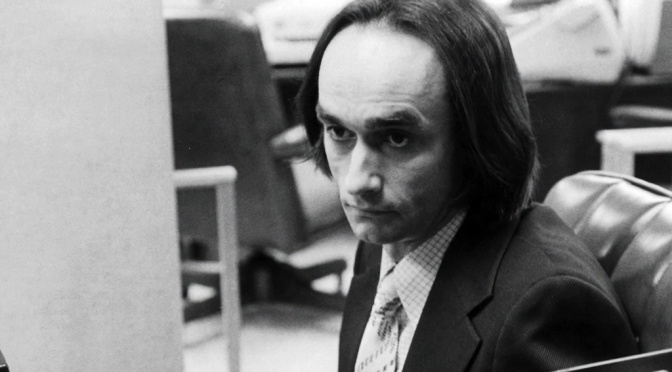 …Life, the Universe and Everything

According to the Hitchhiker’s Guide to the Galaxy, the answer to the ultimate question of Life, the Universe and Everything is…

I turned forty-two in February of this year, and I think I expected an epiphany or two – thanks to Douglas Adams. Sadly, nothing really epiphanized in my brain, so I contemplated my forty-two years and wondered if I’d done okay. During these moments of wondering I happened to watch a clip of some awards thing where Meryl Streep was being honored. Of course, the internet being the swirling vortex of distraction it is, I had to look at the IMDB and Wikipedia and learn more about Meryl…and that’s when John Cazale’s name popped up.

John Cazale was an actor who, despite being a contemporary and good friend to the likes of Al Pacino, Robert De Niro, and Meryl Streep, is not a well known name to many movie goers. However, he owns a statistic that I’m not sure any other actor in history can boast.

I’ve watched every movie Cazale made, but, even so, reading his biography revealed another layer of information for me.

Before he made movies, he was an Obie award winning stage actor. His friendship with Al Pacino blossomed on stage, and Pacino said he could spend the rest of his life acting with Cazale.

For a short while, Cazale’s girlfriend was…Meryl Streep. In fact, Cazale starred alongside Streep in his last movie.

And, here’s the kicker, Cazale was only forty-two when cancer got him.

A flame that burns twice as bright burns half as long

I own up to a tiny bit of misdirection here. I have watched all of his movies but the whole truth is, he only made five. In three, he starred with his good friend Al Pacino, and his last, as he was dying from cancer, he starred with his heartbroken girlfriend, Meryl Streep.

Lau Tzu’s quote in the heading could not be more appropriate though, because Cazale was a brilliant character actor with a sadness in his eyes and a hang-dog expression that could elicit sympathy even if his character deserved none. By all accounts though, he was a good guy in real life.

And the statistic I mentioned earlier? Well, although he only starred in five movies, all five were nominated for Best Picture at the Oscars and three of them went on to win.

I would highly recommend watching all of these. Some incredible performances in truly classic movies.

Possibly an even more staggering fact is several years after he died, The Godfather Part 3 was released and it featured some archive footage of Cazale playing Fredo Corleone. That film was also nominated for Best Picture.

So, I’ll be forty-three next February and I think what I’ll take away from all of this is – quality is more important than quantity.

“Gareth S. Young was born and raised in Scotland, but has now lived for more than 15 years in the American Midwest. This has played havoc with his accent.

A 5th Dan black-belt in Nerd-Fu, Gareth writes books, collects comics, and watches movies like he’s getting paid to. (He’s not. A 25-year association with railroads is what keeps the electricity on in his house.)

In 2010, he published his first full length story, a mystery/suspense novel called Monsters, and in the summer of 2015 will releaseDynamo City: The Wolves of Dynamo, part one of an audacious YA urban fantasy series.

A tweeter of stuff and things, he can be found lurking under the guise of SpartaGus or demonstrating his nerd moves over on his blog http://1000trillionsuns.blogspot.com/.