I’ve never been what you would call a huge Spider-Man fan. I’ve picked up various titles over my years of comic-book reading and enjoyed them, but maybe not to the same degree as other characters and other series. I guess my loyalties were set from an early age when I first started reading comics in the late Eighties/early Nineties: for a good number of years the only mainstream superhero titles I read featured Batman, and the rest of my weekly comic fix was made up of various independent and less mainstream titles. There was little room for anything else.

The new Spider-Man title from Marvel Peter Parker: The Spectacular Spider-Man may be the title that gets me connected to the character in a meaningful way. Written by Chip Zdarsky with art by Adam Kubert and Jordie Bellaire, Peter Parker promises to bring a classic Spider-Man feel to the page.

What constitutes a classic feel? To me Spider-Man has always been at his best when his alter-ego Peter Parker has been at the forefront. A lot of the classic stories have focused on Peter and his struggles with bullies, with girls, and the difficulties he faced in balancing his new-found powers with the day-to-day struggles of being a teenage kid in high school.

He may be (a little) more grown-up now but Peter still retains a sense of wonder and innocence at being part of a superhero elite he could previously only dream of. This characteristic is seen in Tom Holland’s performance in the most recent Captain America film and the just-released Spider-Man: Homecoming. It is also evident in the pages of the first issue of Peter Parker, for example when Peter is taken by Ant-Man to a secret lab where Mason, an inventor, creates technology for super-heroes. Peter tries to stay cool but inside he is awestruck by what he sees.

Having read Zdarsky’s work on Howard the Duck (Yes, that Howard the Duck. Trust me it’s brilliant.) I knew what to expect from his take on Spider-Man. The tone he hits is light-hearted but not light. His sense of comedic timing is perfect, and he is able to ally this with an injection of pathos at just the right moments to elevate his work to more than just a series of jokes and set-pieces. Having said that, the jokes are plentiful and the set-pieces heartily rewarding. In the opening pages Peter arranges to meet Johnny Storm later that evening for a movie night. As soon as he says “I probably won’t [be late]”, we know he is going to be, but the reveal of Johnny waiting outside Peter’s building checking his phone nine minutes after the time they were supposed to meet is still funny, and its moments like these that pepper Zdarsky’s script all the way through, and ultimately enrich the reading experience.

Adam Kubert and Jordie Bellaire are on art duties for Peter Parker. On first evidence it appears to be a great fit. Kubert’s drawing style is a perfect foil for Zdarsky’s writing. Being neither too cartoonish nor too overly stylised Kubert strikes a good balance which helps to portray the built environment in a realistic manner while placing the characters seamlessly within the surroundings. The obligatory splash page featuring Spidey swinging between the skyscrapers of New York is still pleasing to the eye, and Kubert is a master at drawing superheroes in action.

Jordie Bellaire’s colours are flawless as usual. Having appreciated her singular talents on many independent titles over the years it’s thrilling to see her working on a big superhero book. She can colour all the comics as far as I’m concerned as she really is one of the best.

The combination of Bellaire and Kubert is fantastic and nowhere is this illustrated better than in the vertigo-inducing opening page double spread in which we see Peter and Johnny eating lunch on the ledge of a tall building from a birds-eye viewpoint. You can almost hear and smell the street far below them, the cars on the road and the people on the sidewalk all going about their daily business.

For a comic book called Peter Parker: The Spectacular Spider-Man we only see one page of Peter as Peter. The rest of the issue he is fully costumed up. Funnily enough, in the few panels where he is Peter, he introduces himself as Spider-Man on the phone to a woman he rescued earlier in the day. This confluence of identity(s) is something I’m sure will be explored further in the pages of Peter Parker and I’m intrigued to see where Zdarsky takes this character. For now I’m definitely on board with Spider-Man. 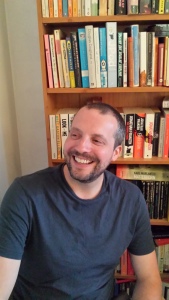 Stephen Hardman is a trainee Legal Executive Lawyer who currently resides in Bath, in the UK with his wife and their cat.  Among other things he writes in his spare time. He is currently working on a novel which he hopes to finish soon, and he has written a few short stories as well, though has not had anything published. Yet. Stephen loves reading and is a huge crime fiction fan; George Pelecanos, Dennis Lehane, and Ken Bruen being particular favourites. He is an editor and contributor at the geek culture website Geeks Unleashed.

His obsession with comic books knows no bounds and he loves sharing news and reviews of all the great comic books and graphic novels being published right now. He also loves listening to music and seeing bands live, and is always seeking out new bands and musicians to obsess about.

Occasionally, some of your visitors may see an advertis